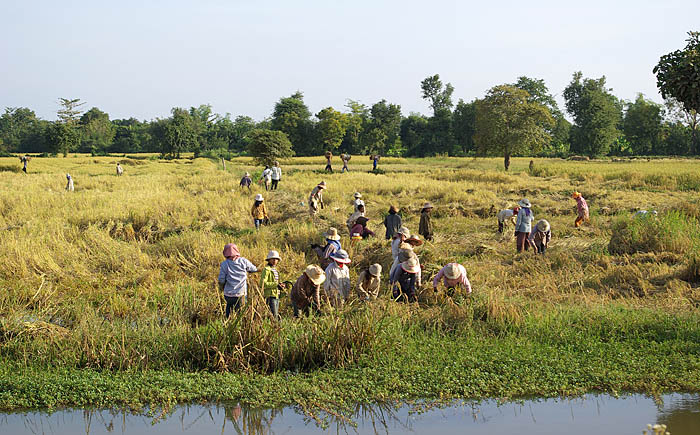 Cambodia has become one of the top grossing rice producers in the world. According to 2009 data from the Food and Agriculture Organization (FAO), around 35% of the country’s US$ 9,872 million GDP came from agriculture. More than 4 million of its population in 2009 were also engaged in agriculture and agriculture-related activities. Come 2015, the country hopes to further increase its rice production to around 15 million tonnes with around 8 million tonnes for export.

Cambodia’s water resource and use

Like any agriculture-based economy, Cambodia’s water resources are used mainly in agriculture. In 2006, its total water withdrawal was 2.184 km3 and more than 90% of this was spent on agricultural activities. Meanwhile, the use of Cambodia’s side of the Mekong River for aquaculture was pegged at 6,000 m3/ha every month.

Despite these resources and Cambodia’s apparent success in rice production, the country’s irrigation system still remains underdeveloped compared to its neighboring countries. The FAO reports that much of the irrigation system in the Tonle Sap area is for managing floodwaters during the wet season than for diverting water resource for crops planted during the dry season.

At the close of the 90s, the Asian Development Bank (ADB) introduced the Participatory Irrigation Management and Development (PIMD), a project that seeks to engage all stakeholders in the planning and management of the local irrigation system. Taking off from the PIMD, the ADB introduced in 2008 the Water Resources Management Sector Development Program, an initiative aimed to improve water resources in Cambodia and lay down a “more efficient and sustainable irrigation systems.” With the ultimate goal of improving the country’s goals in food security, the project specifically targets the rehabilitation of small and medium sized irrigation systems in more than 20,0000 ha of farm land.

The project’s focus is on the four sub-basins (Stung Sreng, Stung Staung, Stung Chikreng and Stung Sen) located in the provinces of Siem Riep, Kampong Thom and Banteay Meanchay. Implemented through Cambodia’s Ministry of Water Resource and Meteorology (MOWRAM), the project’s four components include:

Water use and management is an issue that cuts across the functions of several ministries and agencies not just the MOWRAM. Part of the project’s goals has been to facilitate a more coordinated effort among these stakeholders when it comes to water resource management.

As one of the first steps, a working group tasked to create a ministerial committee that will oversee the national coordination of water resources was created. The working group is comprised of key ministries and agencies including the Ministry of Land Management and Urban Planning and Construction, the Cambodia National Mekong Committee, and the Tonle Sap Authority.

A review of MOWRAM’s organizational structure to identify how its performance of water resources management and delivery of irrigation services will not overlap with other agencies is also underway.

Training, education and information dissemination are also central to the project. The Institute of Technology Cambodia (ITC) and MOWRAM started offering in 2011 an undergraduate engineering degree in water resources management. A training needs assessment has just been completed and it is hoped that vocational training programs will be offered by 2015. The trainings will include topics on on-farm water management and irrigation practice, and maintenance of irrigation works.

Almost three years since the project's start in 2011, there is still a long way to go until its end in 2018. But the initial steps taken to ensure coordinated efforts among agencies and most of all, slowly build the capacities of local communities and recipients are hoped to serve as sufficient foundations for the project’s next activities. One can only hope that by the time 2018 rolls in and the project comes to a close, the communities surrounding the four sub-basins have achieved a confident level of autonomy and capacity that will allow them to sustain the irrigation system and truly manage their water resources efficiently and effectively.